As You Were Metal. Monsters. Mayhem.

"The powerful play goes on, and you will contribute a 'verse." — Walt Whitman, by way of Joss Whedon

Last chance before the lights go out

Hey everyone — just a short note to remind my faithful blog followers and web visitors that all the action is now at the new version of As You Were. Soon I’ll be turning out the lights here for good.

What have you been missing? Well, in addition to all the full posts and comments from this embryonic version of As You Were, there are new stories in Werewolf Wednesday and Thunder God Thursday. There are also regular new reviews on Metal Monday and Feature Friday. Besides all that, this summer I joined a cadre of other bloggers to look at the works of J.R.R. Tolkien in Puttin’ the Blog in Balrog. Plus, the new site is [humility mode off] organized better, has some new features and looks nicer.

So click on over! If you like what you see, please take a second to follow the new blog. I can’t import blog followers from the old version of my site, but fortunately you can easily subscribe to the new one. I’ve put the “Follow this Blog” widget right up near the top. If you’ve been with me this far I’d love to have you along for the ride as we head into winter — I’ll be posting regularly and don’t want you to miss anything.

Thanks again for following and/or stopping by!  It’s been great to have you and I hope to see you at the new site.

… to a new location.  Starting on May 23 (that’s a week tomorrow), As You Were will be at the following URL: http://www.davidjonfuller.com.  All the posts, comments and  other great stuff are already there;  but this post will be the last new thing you see at this address before the lights go out.

But don’t worry — there will be some great new posts springing to life at the new, official site, including a feature interview with Catherine Lundoff on her new werewolf novel Silver Moon, a couple of new blog tours, book reviews and more.

So to those of you who follow this blog, have it bookmarked, or just stop by: please point your browsers to the new site.

Author’s note: a few things have changed since this was written, namely the resurrection of Thor by Marvel Comics in the acclaimed run on the new title by J. Michael Straczynski, alluded to in the comments from Tom Brevoort below. Also, there were new incarnations of Norse myths in independent comics, such as Grant Gould’s The Wolves of Odin.

And one other thing, what was that?  Oh yeah, a blockbuster movie based on Marvel Comics’ Thor, starring Chris Hemsworth as the titular thunder god, who returns to the big screen as the big guy in The Avengers.  If you want to see how the god of thunder went from medieval god to modern superman, read on…

Though their names leap out at us from the days of the week, Norse gods were relatively obscure until recently. Opera figures of Siegfried and Brunnhild were one tentative step into this pagan world, but it took another form of entertainment to plunge a new generation into the old myths: comic books.

Authors put the bite on vampires and their ways

Everyone knows they look like frumpy old ladies, overjoyed that an aging population means they fit in nowadays. Or that they keep humans penned up as food, and having sex with a human is tantamount to bestiality. Or that when a vampire slayer starts killing them off, they go right to the police.

Wait, this isn’t sounding too much like Twilight or True Blood — but they’re some of the ideas introduced in the new Canadian anthology Evolve, edited by Nancy Kilpatrick.

Tesseracts 13 was the first horror title published by Edge, a predominantly sci-fi and fantasy publisher in Calgary. The success of that book prompted this new all-vampire anthology.

She did it — now she needs to hang on

Well, many of us predicted it: Rachel Deering managed to get to $20,000 in pledges for her Kickstarter campaign to fund the remaining five issues of her “lesbian werewolf epic,” Anathema.  A huge and hearty congratulations to her.

Now comes the hard part.  I don’t mean the writing, lettering and publishing, which Rachel will undertake (though the publishing duties have now been picked up by Comix Tribe — a huge coup for Rachel).  No, the challenge now is to ensure the total stays above that mark until the campaign closes on April 30. If any pledges are reduced, bringing the total below $20,000, none of the money is collected.

That’s already happened once — for a very understandable reason. One prospective donor who had pledged $1,000 reduced it to $45 upon learning he would soon have a baby to support. Great news for the donor, on which Rachel and other pledgers offered congratulations; but a snag in the fundraising all the same.

I had no idea when I first wrote about Underworld during a stint as movie reviewer for Uptown Magazine that the movie would spawn a four-movie franchise, the latest of which, Underworld: Awakening, hit theatres in March this year.

I’m afraid I never got past the sequel.  This first instalment had its moments (few and far between) but the second, despite Derek Jacobi doing his best Hunt For Red October riff as a sub captain hunting paranormals (if you’re saying “huh?” I say: exactly), was a hot mess.  And that’s kind of unfair to words denoting temperature and chaos.

If you think comic books are expensive, try publishing one

Creating your own comic book series can be an all-or-nothing endeavour. Just ask Rachel Deering, the woman behind Anathema.
Telling the story of Mercy Barlowe, a woman whose lover, Sarah, is burnt at the stake for being a lesbian, the first issue shows us how Mercy seeks out supernatural help to rescue Sarah’s soul from a sinister cult. (You can read the As You Were interview with Rachel on her career and her own experience with homophobia here.)

Today I’m very pleased to host the second blog tour to stop by As You Were, and it happens to be from another zombie writer, Armand Rosamilia.  Don’t try to pigeonhole him to flesh-eating undead, though.

While he’s currently on tour supporting his new zombie novel Dying Days 2, Armand is also the founder of horror publisher Carnifex Press and a prolific horror author in his own right.

He is also, however, a huge expert in another field: heavy metal. Armand has also written a series of non-fiction titles chronicling the exploits of the women in heavy metal.  If the only ones you knew about were Lita Ford, Vixen, and Doro Pesch, read on…

Werewolf Wednesday: Tunes to wolf out to

As I work on my own interminable werewolf work-in-progress, I think often of what would be on its official soundtrack. This is one of those tricks authors use to avoid writing. We call it brainstorming, or world-building, or visualizing. But it’s not.

Hoo boy, it’s going to be a busy week here at As You Were.  We will of course be celebrating Werewolf Wednesday on said day, but we have another guest post coming up, this time courtesy of prolific horror writer and editor (and metal fan) Armand Rosamilia.

On Wednesday, we’ll be looking at the top werewolf tunes out there.  Yes, I know you all have your opinions and will be full of outrage that I gave your favourite short shrift.

Don’t worry, you can have your say, too!  I’ll be posting my first-ever poll on Wednesday, so you can weigh in and vote (and, if I’ve done it correctly, add your own favourite) for the best werewolf song.

Despite what you might think, I was able to pull together a list BEYOND Ozzy’s “Bark At the Moon” — and turned up some selections that may surprise you. 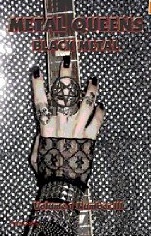 Then, without even blinking, Thursday will feature Armand’s guest post as part of his Dying Days zombie blog tour.  But since he knows of As You Were’s affinity for the heavier side of music, he’ll be devoting his post to the known and lesser-known hard-working women  in metal, which is the subject of another of his book series, Metal Queens. Not enough, you say?  Well Armand will also be giving away two ebook volumes of Metal Queens as part of the post — making this the first giveaway ever on As You Were. It’s a week of firsts!

So: don’t forget to stop back on Wednesday for some great (and diverse) lycanthropic music, and then return Thursday for some metal madness. Metal horns: \m/

ONE of the reasons Stan Lee and Jack Kirby were able to cast ancient Norse gods as modern comic-book superheroes was that they were comparatively unknown, Richard Wagner and the names of our weekdays notwithstanding. Here, then, are a few terms so you can tell your Asgard from a Hel in the ground.

© David Jón Fuller and As You Were, 2012 Unauthorized use and/or duplication of this material without express and written permission from this blog’s author and/or owner is strictly prohibited. Excerpts and links may be used, provided that full and clear credit is given to David Jón Fuller and As You Were with appropriate and specific direction to the original content.
As You Were
Blog at WordPress.com.
Loading Comments...
Comment
×
%d bloggers like this: